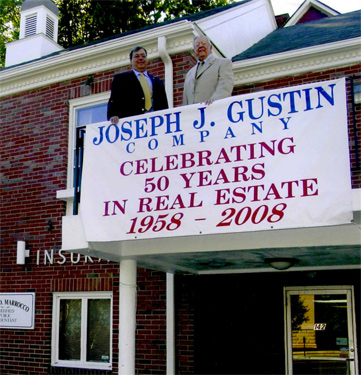 Formerly The Gustin Real Estate and Insurance Company for over 30 years, Dolores Gustin, Vice President and General Manager of our Insurance Division, provided all types of Personal lines of insurance and was admitted to the Century Life Club for production. She was an early pioneer as a female Realtor and Insurer and was Secretary of the Independent Insurance Agents Association of New Britain. Mrs. Gustin enjoyed an impressionable reputation for the many services she provided throughout the years.

Mr. Gustin is an honored member of the Venerable Omega Tau Rau Society, an honor bestowed to very few Realtors and who have received this distinguished recognition.

In addition, Mr. Gustin is an incorporator for YMCA, The Boys & Girls Club of New Britain and Hospital of Central Connecticut – New Britain. He has served, or now serves, on many Boards of Directors in addition to the Connecticut & National Associations of Realtors. He is a former Director of New Britain Bank & Trust, First City Bank, Constructive Workshops, and former President and Board Member of the Chamber of Commerce, and President of the 110 year old New Britain Club.

Community involvement and civic activity is the key to the success of our staff, who devote a good deal of their time to charity and civic organizations. Our Sales team is committed to providing outstanding customer service to our clients through their integrity and professionalism.